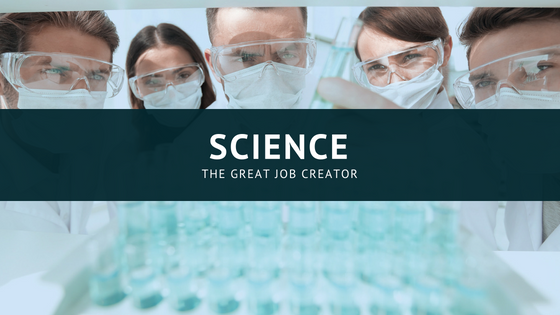 It seems so much of the conversation in the United States today has to do with creating new jobs to boost the economy. There is a push to bring back older jobs in order to get people back to work and lower the unemployment rate. However, if we look at historical trends, funding out dated jobs does not seem like the best way to create jobs. Funding research-based infrastructure that create new industries, is the most sustainable way to create new jobs, and get the American people back to work.

In order to recover from the recent recession, the U.S needs to create 6.7 million new jobs. Add an extra 10 million on top of that to keep up with population growth, and you can see have ourselves a problem that seems too big to conquer. Since the 1990’s, funding for basic research has declined, and with it, so have jobs. If we look back on some of the biggest job creators, we see labs like Bell Technologies. Large research facilities like Bell, created brand new industries which, in turn, created millions of jobs. As the funding for large research labs declined, innovation in those industries dropped. By bringing back funding for research-based labs, we can create new industries and jobs.

So, what’s the hold up? Why, in the last two decades, have we not put funding for research first? One of the biggest reasons is, to succeed in science and have breakthroughs, there must be failures. There is no guarantee that the goals will ever be met. However, massive successes await when there are science and technology breakthroughs. When computers were first starting out, there was no way to see the success they would have in the world today. So, these labs and research facilities need to attract the greatest minds, success guaranteed. However, if we don’t take any risks, then we will be at a standstill, which won’t create jobs.

To fund 3 large labs and 5 small ones, Washington would need to release $20 billion in funding. This number seems daunting, but when you consider the millions of jobs that these research facilities would create through new industries, the number is very small. These facilities would create jobs in energy, healthcare, transportation, water supply, and climate change research. By funding research in these areas, not only would we be boosting job creation, but also keeping up with the rest of the world in innovation.